DID YOU KNOW THE CREATOR OF THE PEACE SIGN WANTED IT TO POINT UP?

Stores around the globe are dedicated to selling clothes with the symbol on them. People wear them as necklaces, bracelets, key chains, and other accessories.   You see it on towels, cups, mugs, stickers and magnets.  They show up in art, on TV commercials and can be seen in most pop culture.  But...

Should humanity be using it?  I mean, it’s just a symbol for love and a desire for world peace... right?  So what’s the problem?  Love and world peace are very good things!  RIGHT?

Well, to understand this topic a little better, we have to dig a little deeper into the history of our beloved "peace" symbol.

The peace symbol, in its proper right-side UP position is a depiction of the Kabbalic Sephiroth or the Tree of Life. Unfortunately, we've been given false information about the peace symbol, as the current upside-down position sub-consciously emanates the opposite energy of peace. Which in turn, is potentially keeping humanity trapped in a cycle of war, death and despair.

(See for yourself which symbol FEELS more positive to YOU... Take our Peace Sign Challenge HERE!)

Have you ever thought of what the origins of the beloved peace sign are, and what those origins mean?

The most common explanation for the origin and meaning of the symbol comes from the start of the peace movement itself.  That the symbol was designed in 1958 when Gerald Holtom combined the semaphore N with the semaphore D (“nuclear disarmament”) to symbolize the link between the end of nuclear weapons and the beginning of peace. The combined symbol is enclosed in a circle to represent “all encompassing” or “total”. 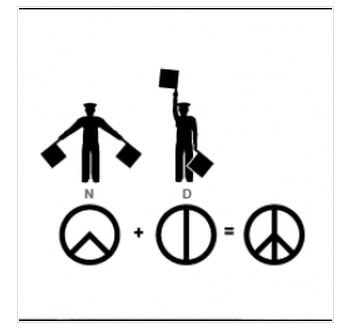 Some issues have been raised beyond this explanation, however. The first being the words from the designer himself.

After the symbol was designed, Holtom later wrote to Hugh Brock, editor of Peace News, explaining the scope of his idea in greater depth:

“I was in despair. Deep despair. I drew myself: the representative of an individual in despair, with hands palm outstretched outwards and downwards in the manner of Goya’s peasant before the firing squad. I formalized the drawing into a line and put a circle round it.” -Wikipedia

Holtom eventually came to sincerely regret the symbol of despair and wanted the symbol to be inverted UPWARDS.  In fact, for the remainder of his life he would only draw the upright peace symbol, and his last dying wish was that the upright version be placed on his tombstone. Unfortunately, his dying wish was ignored. 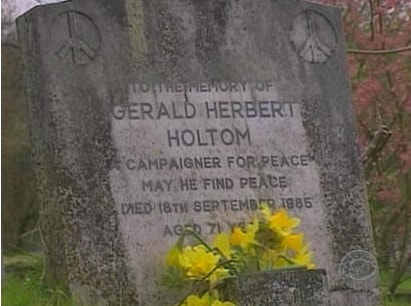 So here we have the first negative connection to the sign: It means despair.


Are there other meanings beyond despair? 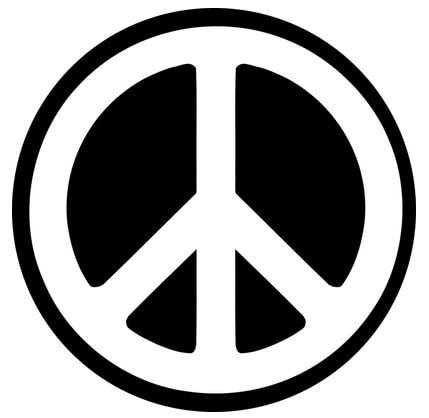 During WWII the “peace symbol” was used by Hitler’s 3rd Panzer Division from 1941 to 1945. The image is the regimental Third Panzer Division symbol. Soviet, Polish, and Hungarian citizens, having suffered from the Nazi massacres, undoubtedly struggled with use of the symbol as a thoughtful way to communicate peace. The symbol can also be found on some of Hitler’s SS soldiers’ tombstones.  (Teaching Peace)

Also, the peace symbol dates back to ancient times. The fifth and final Roman emperor of the Julio-Claudian dynasty, Nero (born Lucius Domitius Ahenabarbus 37 – 68 AD), is remembered in history for persecuting Christians. Nero’s rule was so cruel and wicked, that he even had his mother executed. The First Roman-Jewish War (66 – 70 AD) started during his reign and today the term “Nero Cross” [today's peace symbol] is the symbol of the “broken Jew” or the “broken cross.”  It was used for centuries and was also adapted into satanic rituals.

This "peace" symbol has also been used on RUNES.  Here are a couple of links regarding the symbol's meaning and history.
Those who know the power of ancient symbology and how to use it know that this symbol is used as a symbol of "antichrist".  The word Christ means "consciousness".   So in reality, anti-Christ means "anti-consciousness".  Meaning a powerful group of people want the masses to stay asleep and not be consciously aware of what is really happening around them.  The following video explains this well.  Skip to the 10:20 mark....  www.youtube.com/watch?v=QE6LjuBdbRo
So, there you have it!  You have your choice in what this down-pointing peace sign means.
None of these seem like good choices for the use of a powerful and positive PEACE symbol... do they?

We think NOT!
Today, I (Kehrey Anne Dean) am unable to see the peace sign, pointing downward, as a symbol of peace.  The origins and history of the sign lie in communism, despair, sadness, death and the mocking of certain peoples.  Standard muscle testing confirms that the body recognizes the symbol as a negative symbol.  The current meaning of the down-pointing sign appears to be that we can (and should) have peace without truth.  It is an idol of the "desire for peace" without facing the truths of our current situations.

You simply cannot create peace through force, war, ignorance to facts and truths, intolerance of the beliefs or needs of others, or the inability to recognize the areas within our world, communities and our own lives that carry unrest and that often get overlooked or simply ignored.

We cannot manifest positive results with ideas based in fear, negativity, despair and sadness.

It's time to kick the peace sign up... RIGHT-SIDE UP!   It's time to bring our individual and group conscious and/or unconscious actions (or non-actions) into the light of awareness and take proper action to properly align what we know in our hearts to be the right things to do... both globally and individually.

Peace starts within YOU.  You cannot properly love your neighbor as you love yourself if you do not properly love yourself first to begin with. Peace and happiness doesn't come from "outside" ourselves. It comes from somewhere within ourselves. Those areas within ourselves that must be forgiven, nurtured, loved and raised up... so that true peace, love and happiness can shine out from within us and around us with those who really matter and are closest to us.

Everything in life gives off a subtle vibration... positive or negative.  The peace sign raised in an up-right position is a POSITIVE symbol that just about everyone can literally feel when they look at it.  It reminds us that true peace and happiness starts within ourselves.  We each create peace where it matters... within our hearts and homes... and among our friends and family.

So, we here at Peace Positive™ feel that we should be drawing, wearing, displaying and promoting the peace sign right-side UP.

Don't you think so too?

Read more about... THE POWER OF SYMBOLOGY
"Life is a set of pictures.
When we change our worn-out associations with these pictures,
we change ourselves and, inadvertently, the world around us!"

Harnessing the Power of Symbols By Amber Jayanti from Tarot For Dummies
http://www.dummies.com/how-to/content/harnessing-the-power-of-symbols.navId-323315.html 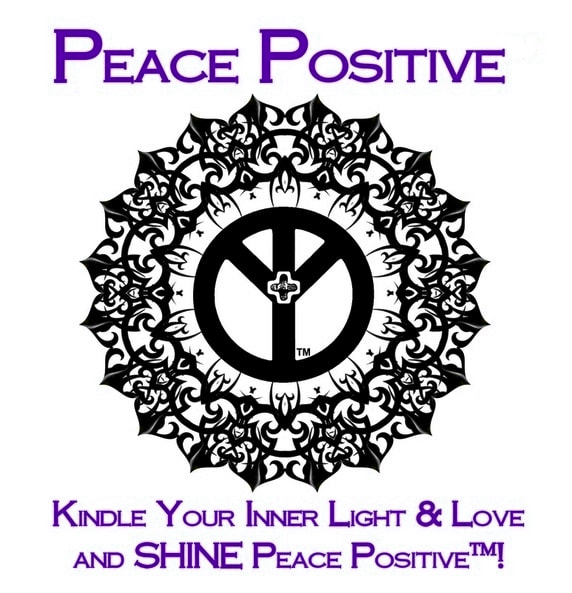 ﻿With arms raised UP as a symbol of life, celebration and JOY.
An individual pro-peace symbol... rather than a (despair-filled) "anti-war" symbol.